We all have been conditioned to believe that race is just skin deep and that everyone is the same on the inside. Anybody who questions this narrative is demonized by the media as hateful, violent, and backwards.  However the key to understanding the New World Order is understanding race and the fact that there are very real differences among the different groups of people. 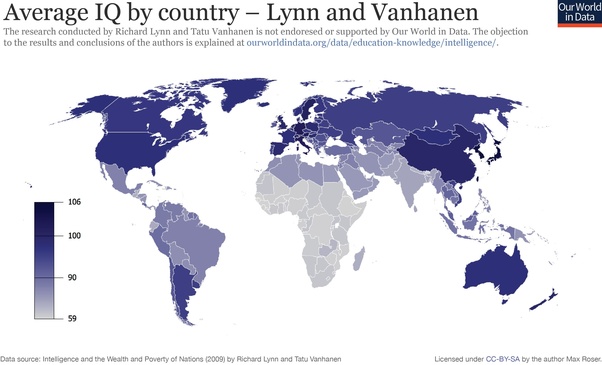 Homicide rates in the US by Race 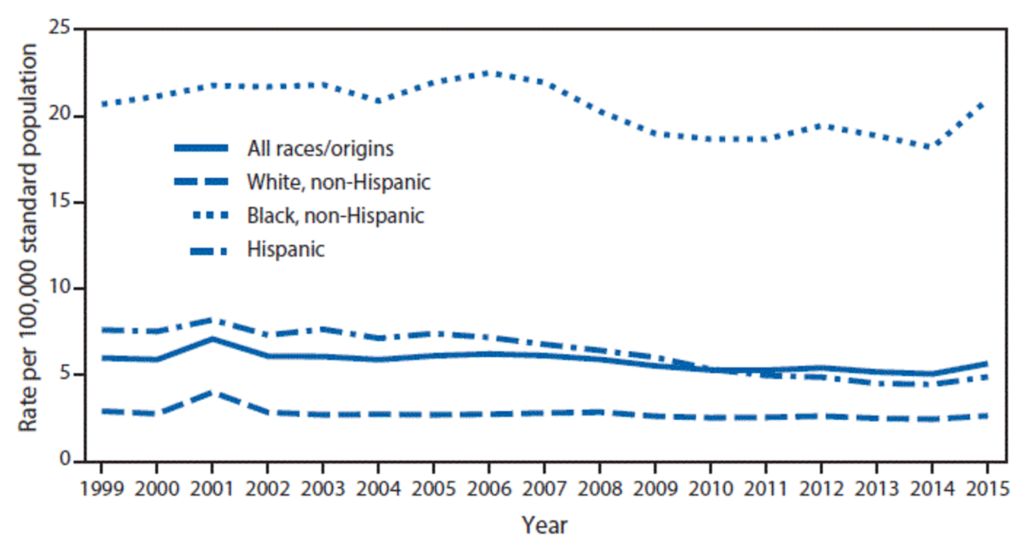 Without understanding race you cannot comprehend the full extent to what is going on in today’s world. You cannot understand the reasons behind the numerous conflicts all around us. Thanks to the dumbing down of society through the education system and the media people, particularly in the West, have lost nearly all concept of race. By not understanding the concept of race you will not grasp how the world really works.

Probably the most important aspect of race to understand is that of individualism and collectivism (also known as tribalism or ethnocentricism). People who are collectivists think as a group. Blacks and the Semitic people such as the Jews and Arabs are collectivists by nature. Whites by contrast tend to be individualistic.

*The list above is a generalization. It does not mean that every single member of that group possess all those traits.

People who are collectivists are cohesive and ethnocentric. They form a tight bond with their people and are very protective of them. They tend to have high regards for people of their own kind and look upon outsiders with suspicion. Collectivist people usually carry an exaggerated sense of victimization and view criticisms of their people and their leaders as an attack. They carry an “us” versus “them” attitude. Collectivists have a strong and impermeable ingroup/outgroup barrier and group goals are emphasized over personal goals. In collectivist societies, strong authoritarian leadership is valued.

(To better understand collectivism, think about how you would react if one of your own family members were criticized by an outsider. You would likely be offended. Even if that outsider was correct in his criticism you would still feel the criticism was an attack. A collectivist similarly sees their entire group as one giant family.)

Collectivism likely evolved as a defense mechanism against invasion from enemy groups over territory and resources. It was intended to protect the group from outside harm and exploitation. They evolved where the climates were warm and the population was dense. Because conflicts with neighbors were common, cooperation among peers was of prime importance. There was strength in numbers. In collectivist societies bonds among fellow people were tight and kinship-based relationships were the norm. Collectivists see themselves as one large family fighting for a common cause.

While most people are probably more comfortable criticizing strangers than their own people, collectivists take that to a whole different level. They tend to see faults in others but not in themselves. They have a high level of self-deception. In societies where they are a minority, many of them truly believe that they are just like everyone else  and any sort of criticism of them is baseless. Collectivists have no problem criticizing others but have difficulty tolerating criticisms directed against them.

Blacks are a group of people that are highly collectivist. Though highly collectivist, they have issues that prevent them from properly protecting their people and organizing efficiently. Their relatively poor work-ethic, below-average planning skills, and low time-preferences are roadblocks that make it difficult for them to move up the ladder in terms of wealth and power. Blacks commit violent crimes, especially against other blacks, at a high rate. The violence among blacks is high in the inner-cities of America and in sub-Saharan Africa, where inter-tribal hostilities remain elevated to this day.

Blacks tend to be poor savers and fast spenders. Because of their low time-preferences, they have difficulty resisting the lure of quick and easy money. They are especially quick to sell out their people for short-term rewards. While whites do sell out, mainly due to their low levels of in-group loyalty, blacks sell out largely because of their relative lack of self-control and discipline. They primarily act in the short-term.

Being highly collectivist, blacks are very defensive of their people. Those who remember the LA Riots back in 1992 recalled seeing a black motorist, Rodney King, being beaten by four white police officers on TV. Shortly afterwards, many blacks in unison went on a destructive rampage of burning and looting businesses across Los Angeles (and other cities.) Although the people who had their businesses destroyed had nothing to do with the beatings, to the blacks, in their mind, it was justified revenge (against the system) for past injustices. In 1995, when OJ Simpson was acquitted of the murders of Ronald Goldman and Nicole Brown, blacks across America went euphoric. Justice had finally been served they thought. Even blacks that thought that OJ was guilty of the crimes were happy to see him let go. To them it was payback for all the years they had been disenfranchised and discriminated against. To them, a fellow brother was freed. The white reaction to the verdict by contrast was that of shock and dismay.

Blacks, like many collectivist people, are highly judgmental of others. Many blacks even express unfavorable attitudes toward fellow blacks who do not fit group norms and act “too white.” Blacks often have preferences in dress code, hair style, and music genres that often distinguishes them from non-blacks.

The theory with the blacks, according to Richard Fuerle, who is the author of Erectus Walks Amongst Us, is that because they evolved in a warm climate where their food was available year round they did not need to develop the mental capacity that people who evolved as hunter-gathers such as the Caucasians and northern Asians required. The Africans simply picked their food from the trees when they were hungry. Hunting for food by contrast took patience, skill, and careful planning.

Like blacks Jews are highly collectivist. They exhibit similar behavior as the blacks and other collectivist people in regards to protecting their people from criticism. As with blacks, Jews get highly defensive and emotional when people outside of their group criticize one of their own. Even criticisms that are not directed towards the Jewish people themselves, such as that of the Israeli government, is seen by many Jews as an attack on their people.

Like blacks, exploitation of the out-group is viewed by Jews as justified and excusable. For example it has been widely known among those in the tourist industry who receive a lot of young Israelis (read Jewish) tourists, that they had a reputation for being loud and disrespectful of others. Many hotel and lodge owners in popular resort areas such as in southeast Asia and South America have complained about young Israeli men trashing their establishment after they vacate them (many hotels have a no Israelis-allowed policy because of this.)

There are major differences between blacks and Jews however. Jews excel when it comes to work-ethic and discipline. They place a higher premium on education and high-investment parenting than blacks. Jews are an extremely committed and highly focused group of people. When they set out to make a goal they make sure it gets achieved. They have a long-term outlook on life and of their people in general. Jews rarely commit violent acts against fellow Jews. A Jew who cheats or sells out his or her people is viewed with scorn by the Jewish community.

Below is from Kevin MacDonald’s book, the Culture of Critique. Though the second column refers to Jews, many of those characteristics could also apply to other ethnocentric groups. 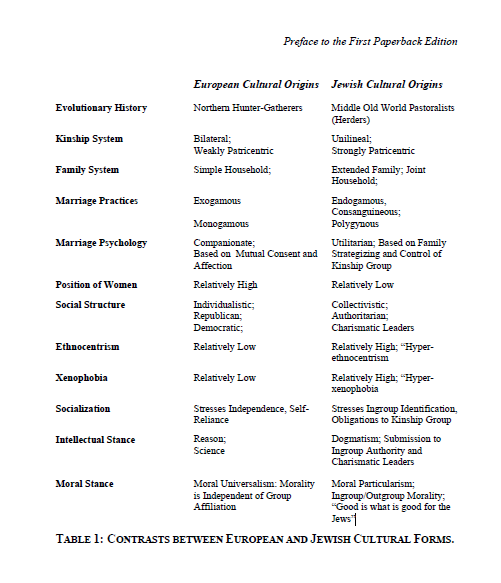 People who are individualists possess:

Individualists have low levels of collectivism and weak in-group attachments. Their trust of strangers are relatively high. European-based people are an example of a group that have high amounts of individualism. European-based people, particularly those from the northern part of the European continent, have an inclination to be self-reliant and have little in the way of “brotherly” attachment to people of their own. They value strong individual rights and democratic forms of government. The in-group/out-group barrier among Caucasians are weak and permeable. Individual, not group-based goals, are paramount.

The relatively high degrees of individualism among European-based people probably stemmed from the way they evolved. It is theorized that they evolved in an environment that was sparsely populated due to the cold winters and they therefore had little contact with outsiders. Dealing with the physical environment was more of a concern than dealing with rival enemy groups. European-based people relied on hunting and careful planning of food storage and shelters. Those who were able to achieve this were naturally selected and survived.

The individualism of whites and their ability to think independently is responsible for unleashing high amounts creativity. Perhaps more has come from them in terms of engineering, architecture, literature, the sciences, and the arts than any other groups of people. They have also developed a high standard of living across the West because of their independence and their willingness to compete in a market environment against fellow peers to create quality products and services.

The relatively high degrees of individualism among whites is however problematic. They don’t possess the type of protective mechanism that ethnocentric people possess. Whites tend to lack skepticism when it comes to dealing with strangers (and more times than not are willing to cooperate with them). They lack aggression in fending their people off from hostile outsiders, thus making them vulnerable to being exploited. Whites are perhaps more likely than any other group of people to cower in the face of accusations of being a racist. Additionally many whites have no problem supporting deliberately non-white organizations such as Black Lives Matter, the NAACP, and the ACLU (this attitude is not just problematic to fellow whites but problematic to non-whites as well. This will be discussed later.)

*That is not to say that the Jews, blacks, and Arabs haven’t been victims. The Jews have been persecuted throughout much of their history, having been kicked out country after country. The blacks were brutalized during the Trans-Atlantic slave trade and the years after emancipation. The Arabs and their land are currently being destroyed in the War On Terror.